PRESS-RELEASE OF THE SEVENTEENTH MEETING OF THE EAPO ADMINISTRATIVE COUNCIL 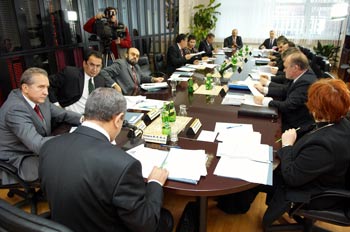 The meeting was chaired by Plenipotentiary Representative of the Republic of Azerbaijan Mir Yagub Mir Abbas ogly Seidov, the Chairman of the EAPO Administrative Council. 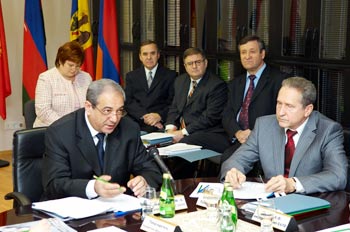 Taking into account the recommendations of the 10-th (October 2005) Meeting of the Budget Working Group the EAPO Administrative Council has approved the 2004 Annual Report and has adopted the budget for 2006 presented by EO President A.N.Grigoriev and I.V.Koteshevoi (the Republic of Belarus), head of the EAPO Administrative Council Budget Working Group.

The EAPO Administrative Council discussed matters of optimization of forecasting and planning of the Organization financial and economic activities and its Office.

The Administrative Council considered a number of additions and amendments to the Organization normative and legislative acts: Patent Instruction to the Eurasian Patent Convention, Statute Fees of the Organization, Status of the EO personnel and other normative documents.

Additions and amendments to the above normative legislative documents to be introduced as from January 1, 2006, are aimed at further development of legislative structure of the Eurasian patent system and relations touching the rights and interests of users and participants of this system.

Additions and amendments made in the Patent Instruction:

Besides, some norms of the Patent Instruction and the Statute Fees were corrected based on practice of their using.

Norms of the Status of EO personnel were changed and amended in line with selection and appointment of the EO staff, as well as employer-employee regulations. This is caused by the additions and amendments introduced to the Administrative Instruction to the Eurasian Patent Convention adopted at the previous (November 2004) meeting of the Administrative Council.

The Administrative Council considered problems of further development in the field of information technologies.

The information was presented to the Administrative Council concerning presentation in full scope and in proper time retrospective and current patent documentation by the EAPO Member States to be included to EAPATIS and corresponding recommendations were given to the above countries.

The WIPO proposals for cooperation with the EAPO on realizing projects in the field of information technologies in said patent offices were taken for consideration.

The AC participants discussed a number of matters related to the tenth anniversary of the Eurasian Patent Organization (the first week of September, 2006)

It is planned to organize a number of jubilee celebrations. Among them – International conference ''Global patent system: present state and prospective''.

The Administrative Council decided to recommend awarding V.I.Blinnikov Gold Medal ''For Outstanding Achievement'' to the participants of the EAPO foundation who contributed much in formation and acknowledgement of the EAPO.

Since the Moscow Mint has made some changes in the medal prototype, the Administrative Council approved the above changes and adopted the image and the medal description according to the prototype.

The EO President informed the AD participants that the first V.I.Blinnikov Gold Medal was awarded to Rospatent (Federal Service for Intellectual Property, Patents and Trademarks) for fruitful activities in the field of intellectual property, merits in formation, establishing and development the EAPO and for marking the 50-th anniversary of Goskomizobretenij – Rospatent foundation, where for more than 25 years worked V.I.Blinnikov.

The AD expressed their gratitude to them for fruitful work as the EAPO AD deputy-chairmen and personal contribution to the EAPO development. 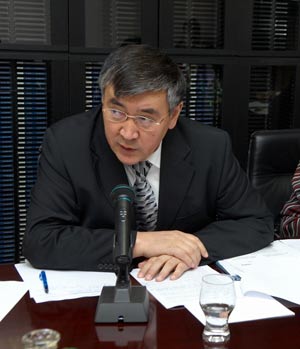 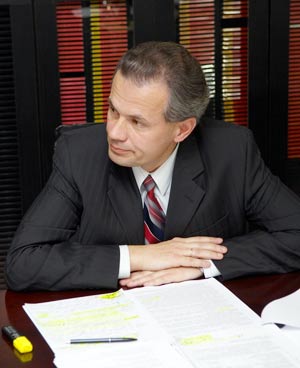 The Administrative Council decided to hold its next regular meeting in Moscow in the first decade of September attaching it to the EAPO 10-th anniversary.

The EAPO normative legislative acts and documents with additions and amendments adopted by the Administrative Council are accessible on the EAPO web-sites.