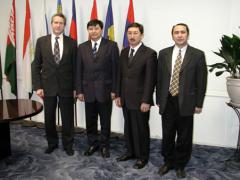 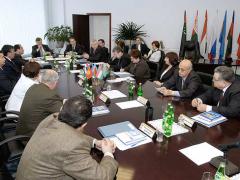 Press-release of the Fourthinth (Tenth Ordinary) Session of the Administrative Council of the Eurasian Patent Organization.

The fourteenth (tenth ordinary) session of the Administrative Council of the Eurasian Patent Organization (EAPO) was held in Moscow, Russian Federation, on November 17-21, 2003. 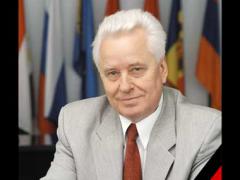 The International Conference "Patents and XXI century" organized by European and Eurasian Patent Offices was held in Saint-Petersburg on September 1, 2003.

The International Conference "Patents and the 21st Century" will be held on 1 September 2003. The venue: Russian Federation, St. Petersburg, conference hall of Radisson SAS Royal Hotel. The Conference is organized by the Eurasian Patent Office and European Patent Office.

On behalf of the Eurasian patent organization and its patent office allow me to heartily congratulate all functionaries in the sphere of scietific and technical creative work of the Russian Federation, the Republic of Belarus, the Republic of Moldova and other countries of the eurasian region with the inventor’s and the innovator’s Day.

Second session of the Constant group on information technologies of Administrative council of Eurasian patent organization (hereinafter referred to as CWGI AC EAPO) was held in EAPO headquarters in Moscow 27-30, May, 2003 and was chaired by EAPO Vice-President Mr.Fayazov Kh. F. 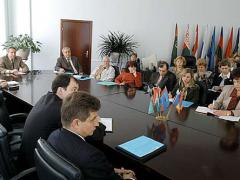 An annual meeting of the eurasian patent attorneys confined to the third anniversary of the International Day of Intellectual property was held in Moscow on April 25th, 2003.

Congratulations from the President of the Eurasan Patent Office

Congratulations from the President of the Eurasan Patent Office 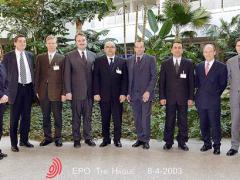 Meeting on technical cooperation in EPO DG1 (The Hague)

On 7th and 8th of April the EAPO headquarters in Hague (the Netherlandas) welcomed the EAPO delegation talks.